Alright. This post is rather cobbled together, full of pictures of several different Underwood Golden-Touch typewriters. Each one of these machines has something that is different than mine, be it colors, layouts, or decals. First, the advertisements: 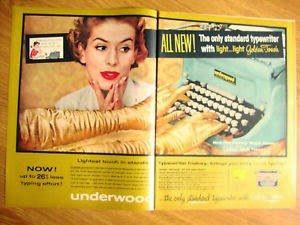 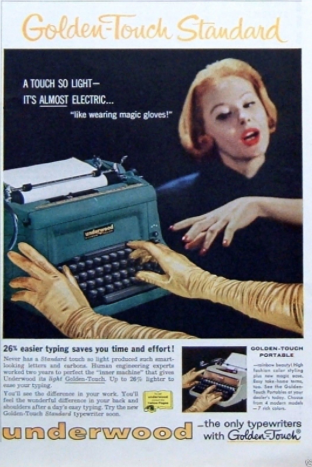 The ads above clarify that 'Golden-Touch' refers to how light the touch is. BAH! I object! Mine may have been tuned to someone's liking, I'll admit, but mine does NOT have a light touch. Golden, yes. I love the touch on mine. But light? Not so much. See my Golden-Touch review for clarification.

Getting back on track though, see that the machines in both the above ads are blue, yet still manage to have keyboard variations. The one above has an all-white, and the one below is all-grey. The switches on the faces are also white and grey, respectively.

Here are pictures of mine, taken for the Typewriter Database: 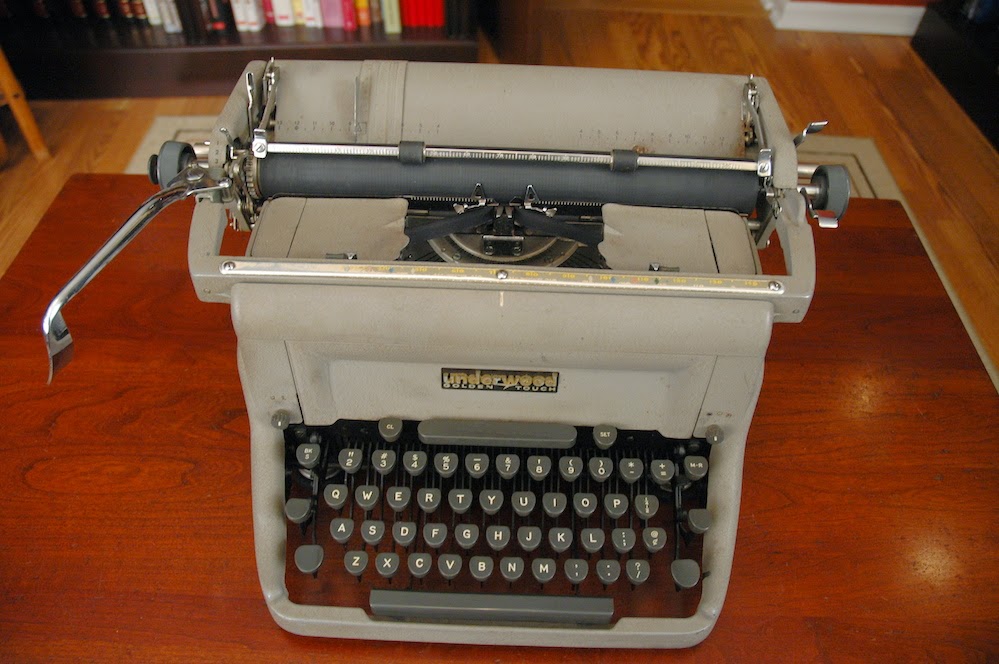 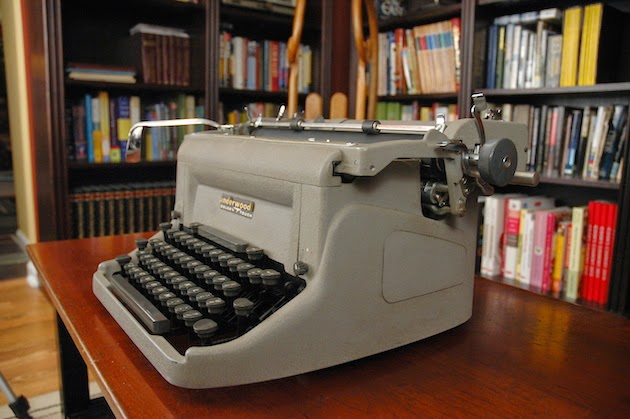 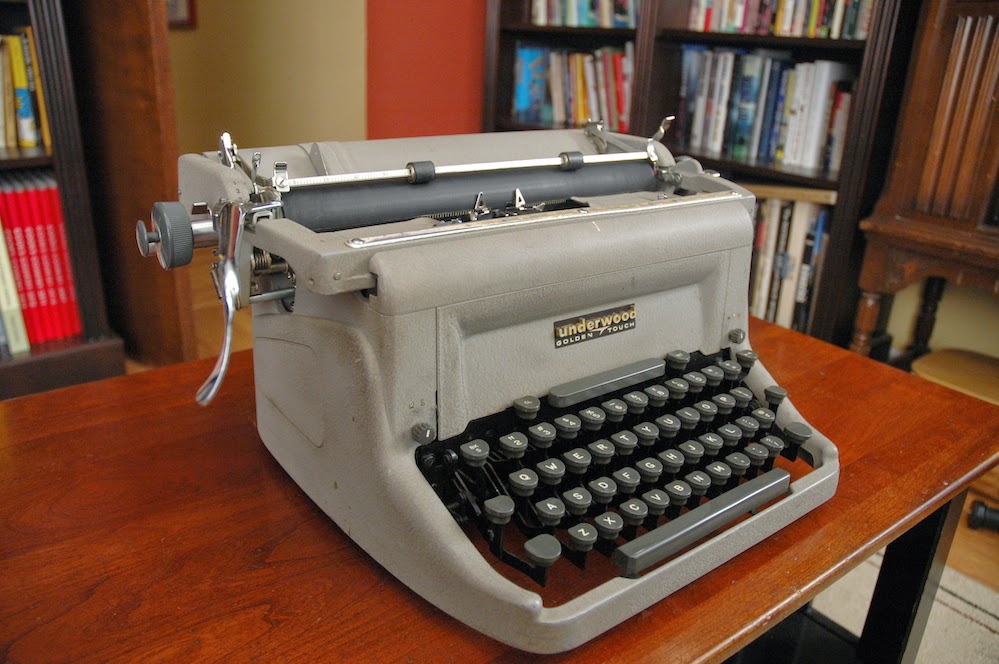 Grey with an all-grey keyboard. Pretty office-like in my opinion. Yet Michael Clemens' machine is robin's egg blue with the all-grey keyboard. You can view that one here. Who was Underwood marketing to? Offices or people? I've seen red Golden-Touch typewriters in the ads, so clearly some of them are colorful.

The earliest machine that isn't that different from the Golden-Touch is the Underwood SX150.  These were early 50's, and looked almost exactly the same, but with five differences. Firstly, up-and-down switches instead of twist switches. Secondly, a huge globe logo. Thirdly, the touch control is on the right side. Fourthly, the flip-down faceplate isn't as concave as the newer ones. Fifthly, an Underwood decal on the paper table. Other than that, pretty much identical. 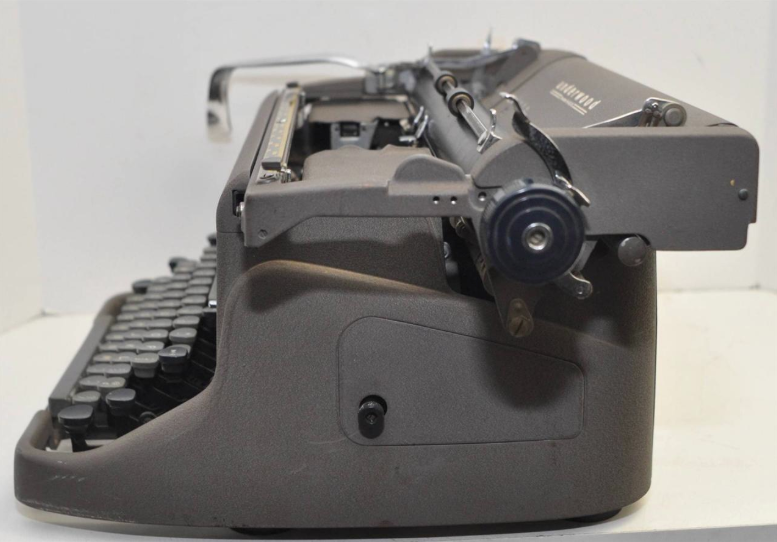 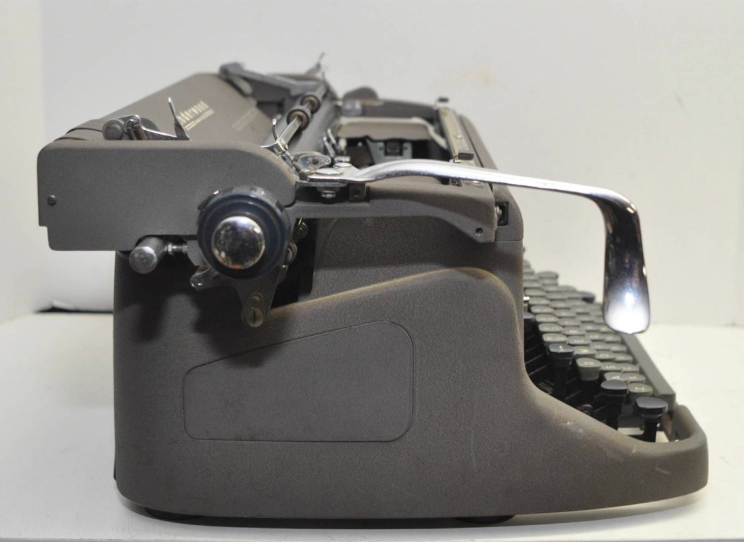 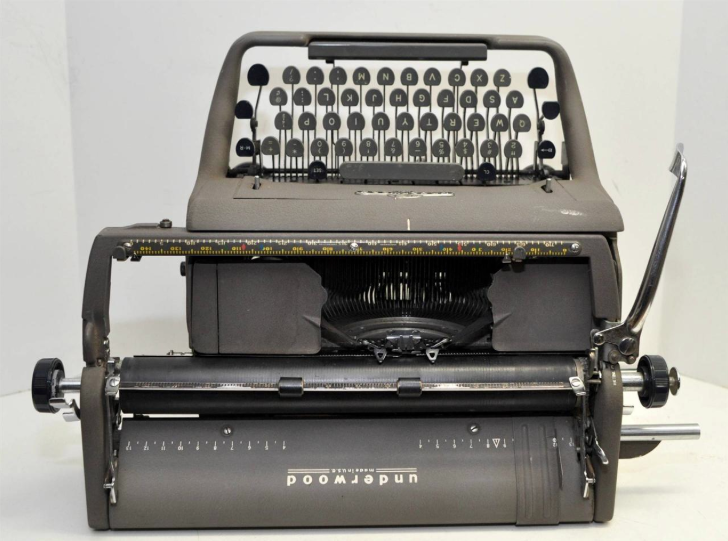 Another thing that I saw was the keyboard color differentiation. All of the edge keys are black, but every other key is grey.

Following in that vein is the following Golden-Touch, which also has the same kind of color separation in its keys. This one has the same greys that mine does, yet has a large swath of white in its keyboard. Below is a Golden-Touch with a really odd color separation. The whole keyboard is white, with the exceptions of the tab key and spacebar. The switches on the face are grey as well! Another thing that this machine has that the other new ones shown thus far don't, is a decal logo on the paper table: 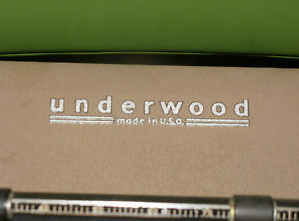 What gives, Underwood? I would like that decal, too! Well, it doesn't end there. The color that I wasn't expecting at all was a bizarre green: 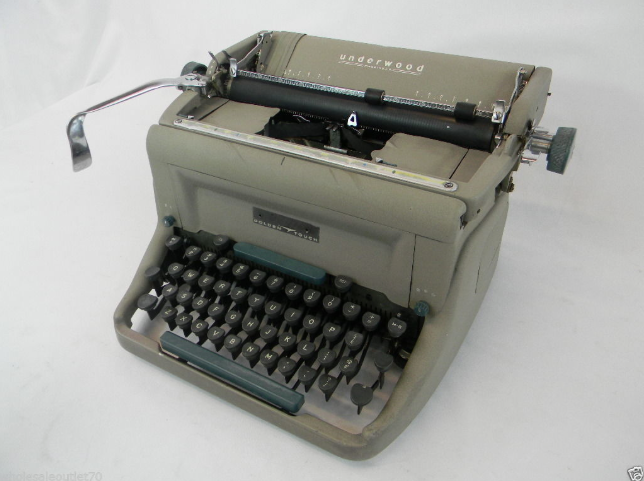 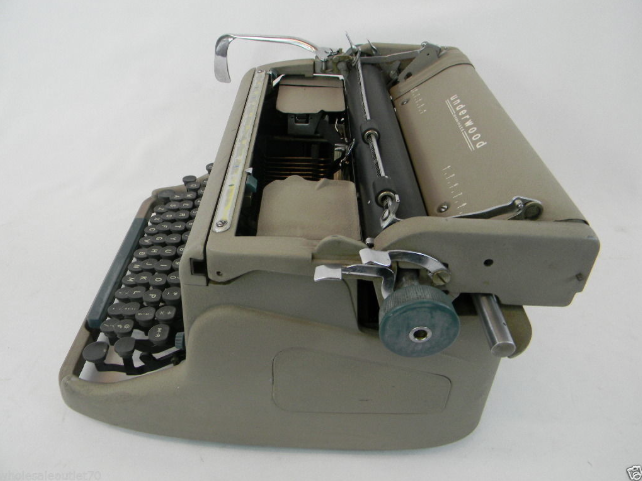 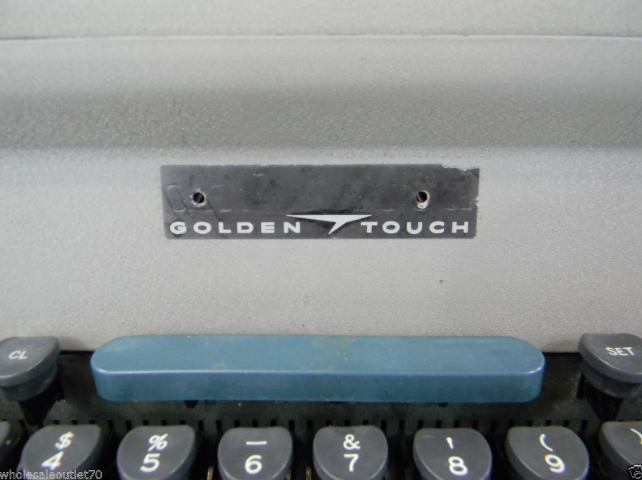 What gets me about that one is that it has a grey keyboard, but an oddly green spacebar and tabulator. Oh, yeah, and then there are the green switches and platen knobs. Also greeting us is the decal logo, which seems to be laughing at me the more that I see it: "Consistency? I think not!" Thankfully, the keycaps are relatively consistent. No changes in what the margin release and whatnot say. 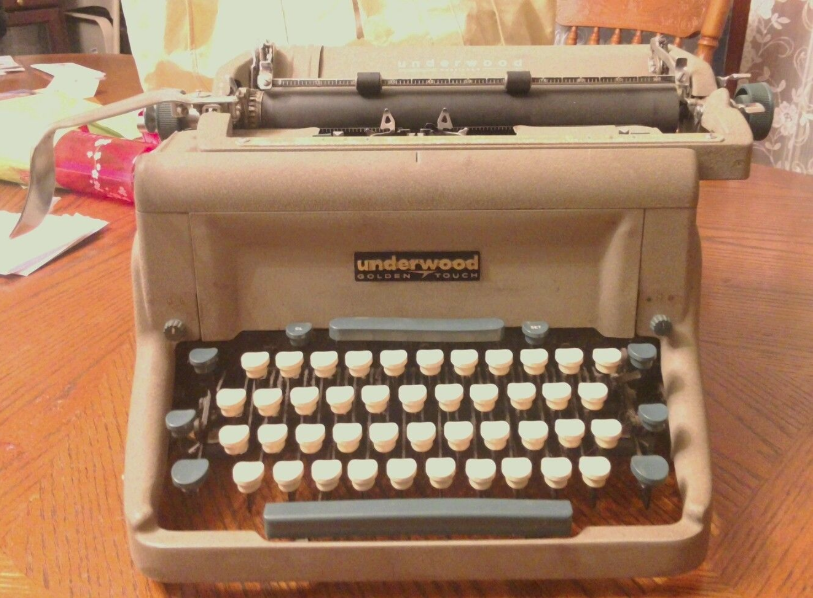 At this point, I can't say that I'm surprised. A grey typewriter with the logo, white keyboard & green surrounding keys, yet no double-moulded M-R or BKS. And to top it off the switches and platen knobs are once again that odd green color.

Underwood never ceases to amaze, though, and produced one that was identical to this one in every way, but decided to put the M-R and BKS back on it.

Yep. Right up there you can see M-R and BKS. 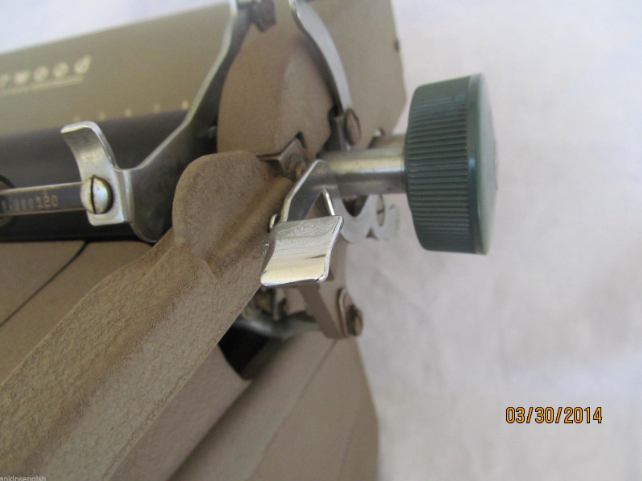 Hiding in the left is the decal logo, and just to the right of the center is the green knob. 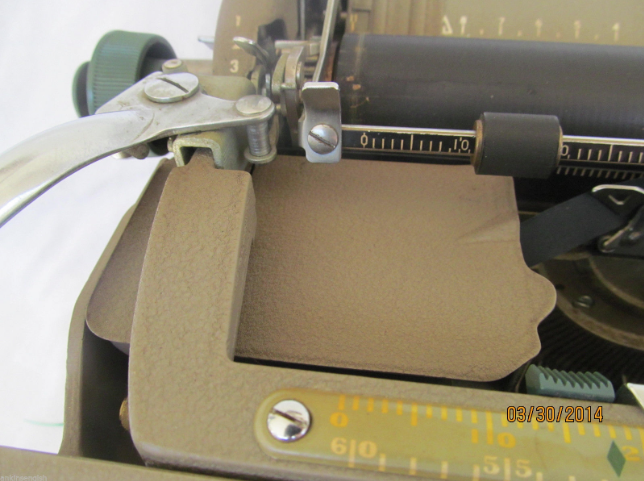 I don't know why this one is in here. We know about the platen kno -- hold up. Look down in the lower right. The margin select button is green, too! Have those been changing colors this whole time without me noticing? Well, I went back to look, and they have. I haven't seen white, but grey, black (SX150), and green seem to be the colors that those are moulded in.

How many variations are there? Do the red ones have green keyboards, too? How about red paint, black keyboards with green letters, white switches, and the decal logo? How random does this get? It seems like Underwood had a slot machine in its factory, and every time one of these got to the plastic parts someone cranked the slot and waited for it to say what colors to put on the thing. I guess it'll take keeping my eyes open to see what's out there, but it certainly seems that red is the most uncommon paint color on these machines, and that the decal logo is an added bonus.

Keep your eyes out for different color schemes. That way we can get a good idea on the rarity of some of these combinations.